A variety of Anorthite feldspar, Labradorite is named for the type locality for the variety on Paul Island off the coast of Labrador, Canada. Uncommon, but widespread, Labradorite can be found in other Canadian localities, in the United States, Mexico, Italy, Finland, Norway, and Iceland among many others. Labradorite exhibits a readily identifiable iridescence with plays of rainbow-esque colors. Labradorite forms in mafic igneous rocks, anorthosites, sometimes in amphibolites, and as detrital grains in sedimentary rock. 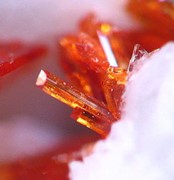 The original Labuntsovite of the Labuntsovite Group, and now designated at the manganese dominant analogue of Labuntsovite, this mineral was named for Russian mineralogists Aleksander Labuntsov and Ekaterina Labuntsov-Kostyleva. Found in several Russia localities including in the co-type localities at the Yum’egor Pass in the Khibiny Massif, where it occurs as an alteration product of murmanite in alkaline rocks, and at Kuftn’yun Mountain in the Lovozero massif. Additional localities include at Magnet Cove in Arkansas, USA, and as crystals in cavities in igneous breccias at Mont Saint-Hilaire in Quebec, Canada. Occurs as orange to brown-orange prismatic crystals and radiating clusters. 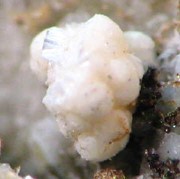 Named in honor of Andre Lalonde, a professor in the Department of Earth Sciences at the University of Ottawa in Canada for his work in alkaline intrusions and mica schists. Lalondeite can be found only at its type locality in the Poudrette quarry at Mont Saint-Hilaire in Quebec, Canada where it occurs as a late-stage, low-temperature hydrothermal mineral. Lalondeite can have a medium to strong fluorescence of violet-blue under mid-range ultraviolet wavelengths.