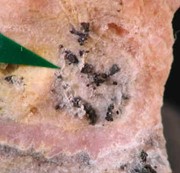 Named for the Uchuc-Chacua deposit, now the Uchucchuacua mine, in Cajatambo, Peru where Uchucchuacuaite gets its type locality and one of only two confirmed worldwide localities. It occurs in Peru “in a telescoped polymetallic hydrothermal deposit.”

Named to honor George Ludwig Ulex, the German chemist who was the first to accurately analyze the mineral. This widespread mineral occurs most typically in playa and salt-marsh deposits that form in arid regions. Ulexite can be found in the surrounding bedding from such deposits with the boron source coming from near-by hot springs. Certain occurrences of these types of deposit circumstances can contain up to one billion tons of this mineral. Parallel masses of these fibrous crystals have natural fiber optic properties, allowing for light and even images to be transferred from one end of the crystal to the other. This property is why the mineral is occasionally called the “TV rock” or “television stone.” Ulexite is somewhat soluble in water. Under long-wave and short-wave ultraviolet light, Ulexite may fluoresce a yellow, yellow-green, cream or white. In some cases it is also phosphorescent. 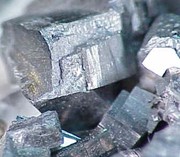 The discoverer of the mineral, Johan Christoph Ullmann, a German chemist and mineralogist, is the namesake for Ullmannite. Relatively common and widespread, Ullmannite is found with nickel-bearing minerals in hydrothermal veins. 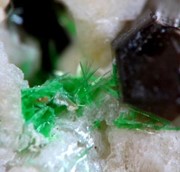 Named to honor George Henry Frederick Ulrich after his contributions to Victoria, Australia mineralogy. Found in only one locality in the world at the Lake Boga granite quarry in Victoria, Australia, Ulrichite occurs as a secondary mineral in irregular, crystal lined cavities in pegmatoidal granite. Ulrichite is radioactive and can fluoresce a strong yellow under short-wave ultraviolet light. 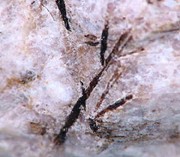 Named after Lake Umbozero in the Kola Peninsula of Russia near where Umbozeroite finds its type locality at the Umbozero mine. Occuring only in Russia, it is found “in pneumatolytic-hydrothermal veins cutting alkalic rocks in the upper part of a differentiated alkalic massif.” Umbozeroite is radioactive.