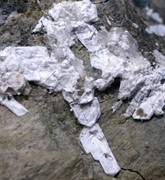 Named to honor Wilhelm Karl von Haidinger, an Austrian mineralogist. Haidingerite is a rare mineral that forms from the dehydration of pharmacolite at one of its localities at the Getchell mine in Nevada, USA. Other localities for Haidingerite include the Czech Republic, Germany, France, Poland, Kyrgyzstan, and others in the United States with additional newer localities in Switzerland, Belgium, and Morocco. 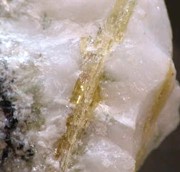 Named after the type locality at Hohe Hain Mountain in the Liberec Region of Bohemia in the Czech Republic. Additional localitied for this rare mineral occur in Brazil and Norway. Hainite occurs in cavities and in the groundmass of phonolites and is associated with aegirine. Hainite occurs as yellowish, slender needles and plates. 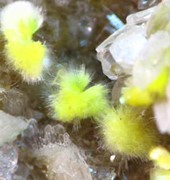 Named for the type locality near the Haiwee reservoir in the Coso Mountains in Inyo County, California, USA. Haiweeite is a rare mineral that can be found in additional localities in Brazil, Argentina, and Austria, among a few others. Haiweeite occurs in the surfaces of fractures in granites as well as in voids in nearby lakebed sediments at its locality in the Coso Mountains, and along fractures in tourmaline-bearing granites and granite pegmatites in a Brazilian locality at Perus. Haiweeite will dully fluoresce a dull green under ultraviolet light. It is strongly radioactive.

Named after the Greek word alati, which means “salt,” as Halite is natural salt. It occurs as an evaporate in sedimentary rock and has the ability to form immense beds. Halite can also form as volcanic sublimate, efflorescences and as a cave deposit. Crystals can have fluid inclusions and can be included in other minerals from metamorphism. Halite is common and widespread, and well studied material can be found in localities in Austria, Germany, Poland, Italy, India, and the United States. Halite is, as we all know, soluble in water and has a saline taste that makes it so popular. Rarely, halite will fluoresce red under short-wave ultraviolet light.