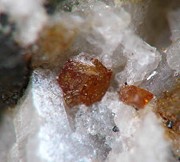 Named for its type occurrence in Tajikistan, sometimes spelled Tadzhikistan as translated from Russian, Tadzhikite was originally thought to be yttrium dominant, but is, in fact, cerium dominant; however Tadzhikite can still be found to be called and labeled as Tadzhikite-(Y) instead of Tadzhikite-(Ce). Tadzhikite occurs at its type locality within replacement zones in pegmatitic dikes. It occurs in only four countries: Tajikistan, Italy, Norway, and Canada. 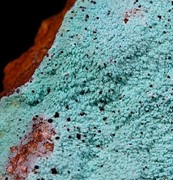 Named for its type locality and the location at which the mineral we first described at Takovo in Serbia. This rare mineral is found in only a few localities including France, Aurstralia, and the USA as a component of karstic bauxite deposits along the contact with limestone and metamorphosed seprentenite and additionally as an alteration mineral after nickel sulfides.

Phyllosilicate - Triclinic - not a Mica group member. Foliation not flexible. 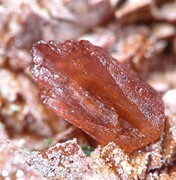 Named for its type locality and first noted locality at the Talmessi Mine in the Esfahan Province of Iran. This rare mineral occurs at just a handful of localities as a secondary mineral in the oxidized zone of hydrothermal mineral deposits as an alteration product of realgar, orpiment or copper-nickel arsenides.