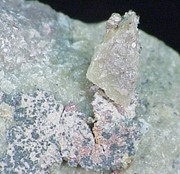 Named for Professor Eugen Friedrich Stumpfl, an Austrian mineralogist at the Mining University in Leoben, Austria, to honor his work on noble metal compounds. Eugenite is a rare mineral that can be found in cuprite and in low-grade copper sulfide ores in shales and carbonate rocks. Localities for Eugenite include notably in Poland, and the United States, with a few other known localities. Eugenite can be found in association with chalcocite, covellite, tennantite, hematite, calcite, ankerite, and gypsum.