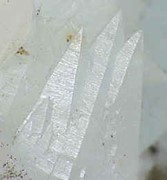 Named for one of the two co-type localities in the Alston Moor District at the Brownley Hill mine in Cumbria, England. The other type locality for Alstonite is at the Fallowfield mine in Northumberland, England. Additional localities include in Wales, Russia, Poland, France, the United States, as well as newer localities in Namibia, Greenland, and China. Alstonite is general found in low-temperature hydrothermal lead-zinc deposits and more rarely in carbonatites. Alstonite will fluoresce yellow under short- and long-wave ultraviolet light.

Good coverage of colorless to white, 1-2mm, pseudohexagonal dipyramids showing horizonatal striations. These crystals are perfectly formed and euhedral. Alstonite is the dimorph of barytocalcite. and also paralstonite. Swap Ca and Ba in the formula and you have Barytocalcite. Drop calcium all together and you get Witherite, which forms the bulk of this specimen. The Alsonite crystallization follows natural voids between Witherite crystals. The Witherite occurs as discoidal crystals to 1.3cm, but there are just a few of these. The rest of the Witherite are large anhedral forms seemingly deformed by etching. Cool specimen. It is similair to the Witherite pictured on Mindat from this locality. Note that Alstonite looks like it occurs on that one too if you look closely.

Alstonite as sharp white, rice-shaped crystals to 2mm. On the side of this specimen is a vug with a yellow Fluorite crystal and thousands of colorless, perfectly terminated Alstonite crystals.