Many of you are aware that we have been posting specimens from the “Phillips Collection”. We acquired a small portion of this comprehensive collection in May of 2011. In October we travelled to Bellingham, Washington to pick up the remainder of the 602 flats. As you can imagine, we are very excited to have acquired Don’s collection. This collection not only offers depth in species (2,000 plus), but it also provides mineral suites from all of the most important mining districts in the world: Franklin, Langban, Mapimi, Kola, Tsumeb, Crestmore, and Cornwall. This of course is the short list as Don also collected specimens from Arizona, Germany, Japan and elsewhere.

You’ve already seen some of the specimens that we posted from Cornwall, Schneeberg, and several random pieces. In the coming months you will see more of Don’s collection. When our new website goes live sometime in January or February of 2012, we will unleash the full potential of Don’s collection.

Don is retired and currently lives in Bellingham, Washington with his wife Lauren. I had the pleasure of getting to know them during my introduction to the Seattle mineral “scene” at Bart Cannon’s Mineral Market show held each year in May.  It’s a great show with a lot of hard core field collectors who know minerals. Don is one of those guys and they invited me to stay with them to look over his collection. As I got to know Don, it was obvious he was both a student of mineralogy and a very knowledgeable collector. The flats and flats of minerals were overwhelming but fun to look through as you can imagine. During my first visit, I packed up 15 flats of Don’s Cornish and Schneeberg suites but dreamed about the remainder during my flight home. In October I flew to Seattle to get the remainder and drove a 17 foot U-Haul truck home with the remainder. 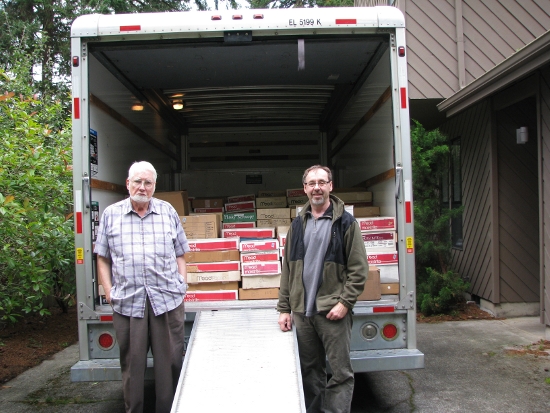 Don (pretend pouting) and me (genuine smile) at the parting

In his own words, here’s a little about Don’s life and his collecting adventures:

As fortune would have it, Don’s high-school chemistry teacher had previously worked for the New Jersey Zinc Corp, in Franklin, NJ. On learning of his student's interest in minerals, Dr. Lyman brought in a UV lamp and two large Franklin ore specimens, which he then gave to Don, inspiring a school science project on fluorescent activators that won honorable mention in state competition.  By the time Don graduated from high school, he had acquired close to 100 uncommon to rare mineral species, assembled a display of fluorescent minerals, and had started to trade and purchase Franklin/Sterling Hill minerals with old friends and acquaintances of Dr. Lyman, one of whom was mineral dealer John Albanese. 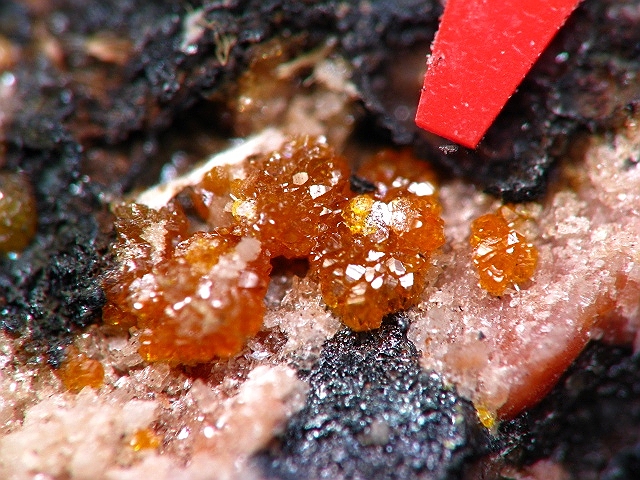 Mineral collecting took a back seat as Don earned a bachelor's degree in physiology at Ohio State University, served six months in the U.S. Army Reserves, and went back to OSU as a research assistant in the physiology department. Boredom and a percolating talent in writing sent him to the University of Wisconsin, Madison, and the Illinois Institute of Technology for graduate work in science writing, and he settled in Chicago for a career in medicine and health sciences, specializing in infection control and hospital ethics. Happily, his work involved lots of travel, and he began to attend mineral shows, meet mineral dealers and collectors, and best of all, collect.

Don’s mineral collection grew exponentially over the next 25 years. In 1965, he became friends with one of the top field collectors in the country. Paul Moore, a professor of mineralogy in the Department of Geophysical Sciences, University of Chicago, who had found and described a host of new species, wanted to go back to Sweden to do post-graduate work on identifying the crystal structures of several rare Langban species. Needing several hundred dollars for the trip, he sold Don a large part of his personal collection. Don joined Paul at various collecting sites (e.g. pegmatite areas in the Black Hills; the Palermo No.1 Mine in New Hampshire).  They both attended the International Mineralogical Association meeting in Berlin in 1974, with post-meeting excursions to the Pleystein-Hagendorf pegmatite areas.  Afterwards, Don zipped off to the Clara Mine in Bavaria, visited with several of Paul’s collector friends in Zurich, and collected at the Lengenbach Quarry.

By then, Don’s collection had grown to about 2,000 species, but new acquisitions were becoming as rare as the species he had not already acquired, due in large part to the increasing cost of specimens.   It was Paul who suggested that he turn his attention toward species-rich localities and collect associated minerals (paragenetic suites) from these sites as a way to better understand how minerals evolve within their environments.

Already a step ahead on rare minerals from many prolific localities, such as Tsumeb, Franklin-Sterling Hill, Langban, and Vesuvius, Don found a renewed joy in adding more common species for each of his chosen locales -- and a new attitude towards collecting. Once he realized that the rocks he had previously scorned essentially set the ground rules (!) for mineral development, he started to add them to his collection.  He joined the Chicago Rock & Gem Club and started displaying his locality suites at the annual Chicagoland show. For several years, he chaired the Mineralogy Committee of the Midwest Federation of Mineralogical and Geological Societies.

Don did a lot of personal collecting in the Upper Peninsula of Michigan; the Crestmore Quarry, Riverside Co., CA; Majuba Hill, NV; Magnet Cove, AR; Rosiclare, IL; Sudbury, Ontario; Mont St-Hilaire, Quebec; and Cornwall, England.   In recent years, he has focused on the fantastic output of new species and their associates from the Kola Peninsula. He also acquired several mineral collections, one from the Wagon Wheel Rock Shop, which went out of business in Colorado; a rather large collection of Franklin/Sterling Hill material from a former mining engineer in Franklin; and a large number of micro and thumbnail specimens from Russ Kenaga, a collector from the Seattle area.

Over time, Don amassed close to 30,000 specimens, with many duplicates.  In the late 1980s, he started to sell minerals through a series of mineral mail auctions in Chicago, under the name Rare Mineral Exchange.  Before leaving Chicago for Bellingham in 2001, Don donated about 100 flats of minerals to the Weis Earth Science Museum in Menasha, Wisconsin.

Once settled in Bellingham, he joined the local Mount Baker Rock and Gem Club and the Skagit Valley Rock & Gen Club in nearby Mt. Vernon, WA, where he has presented different mineral exhibits in the annual shows of both clubs.  Don is also an active exhibitor and satellite dealer at the annual meetings of the Northwest Chapter of the Friends of Mineralogy, and is a long-time member of the Fluorescent Mineral Society.  Three years ago, he donated 90 flats of minerals to the Hudson Institute in Peekskill, NY.

Arthritis and age-related back problems have curbed the physical work needed to maintain the collection. But Don will continue his interest in minerals as a mentor to young collectors, and as a writer; he has some interesting ideas about the future of collecting he is looking forward to sharing. In the meantime, Don stays busy by managing and arranging music for the Swing Connection, a 19-piece jazz dance band that performs for concerts and dances in the Bellingham area. He also enjoys listening to his huge collection vintage swing band LPs and just enjoying life in his wonderful home with Lauren.