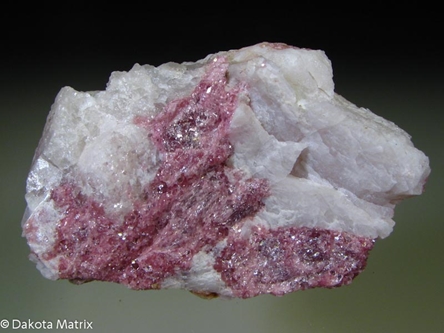 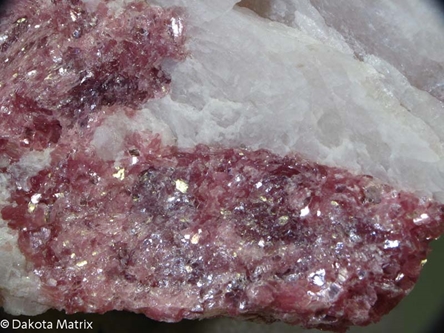 Lilac-purple crystalline Lepidolite with faint pink Beryl, Spodumene and Quartz The Spodumene laths are thin to about 2mm and fragmented in matrix to about 2cm. Both Lepidolite and Spodumene reflect the lithium presence within the Harding pegmatite. At first glance you will not notice the beryl matrix until the slightly grayish quartz is seen. A scratch test then determines the beryl segregation with beryl being slightly harder than the quartz. Lepidolite is a lithium rich mica group member and is one of those troublesome micas which are inadequately described. Click here to learn more about mica group minerals.

One of the most famous pegmatite geologist of our time, the late Richard Jahns, wrote an article in MR v. 8 n. 2. Jahns was a pioneer in the principles of pegmatite evolution. Pegmatite formational theories themselves have evolved but the basic descriptive geology and mineralogy have not. If you have not read this article - then do so. Pegmatitic geology and their mineralogy differ depending upon the locality, but the fundamentals and principles are applicable for each. The Harding mine is a zoned pegmatite and is similar to many Black Hills and New England pegmatites with zones of lithium, beryllium, and quartz.