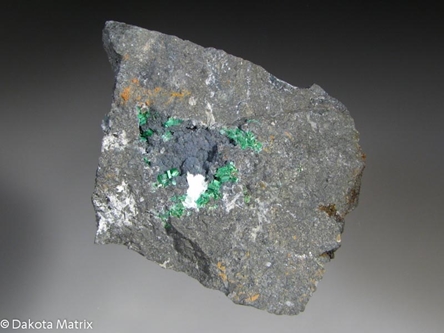 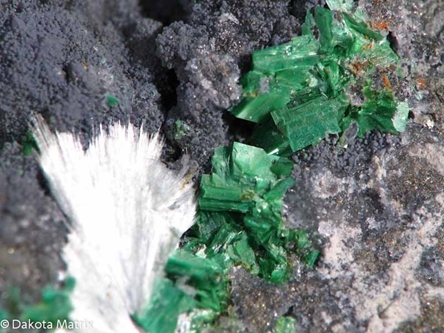 Green tabular crystals of Sincosite to 2mm with a white spray of Minyulite from the 1996 find in the Black Hills. Not too many of these are left. Sincosite was first found in the early 1920's in the phosphatic black shales of Sincos, Peru, thus the name. It was also found in the 1890's at the Ross Hannibal mine, but was thought to be Torbernite. Much later a specimen from Bryn Mawr college was reanalyzed and the true identity was made. In 1996, the Sincosite deposit was rediscovered during open pit mining the old Ross Hannibal workings. The Ross Hannibal was mined in a phosphate-rich zone within the lower Cambrian Deadwood fm. This specimen is from that find. You can read all about it in the Min. Record May/June 1990 issue. A copy of that article will be sent with this specimen.