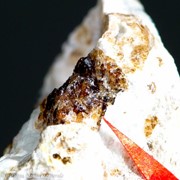 Named for Russian crystallographer Vladimir Mikhailovich Golyshev of the Mordvinian State University in Saransk, Russia. It occurs only at the type locality in the calcium-rich peralkaline Kovdor Phlogopite mine in the Kovdor massif in the Kola Peninsula, Russia. It is associated with cancrinite, aegirine-augite, hedenbergite, orthoclase, pectolite, thomsonite-Ca, tacharanite, and calcite. Appears as reddish-brown grains, and rarely as crystals.

Named for Forest A. Gonyer, an analytical chemist in the Department of Mineralogy and Petrography at Harvard University in Massachusetts, USA. Gonyerite is a rare mineral that gets its type locality from Langban, Sweden, and has additional localities in South Africa, the United States, Norway, Italy, and Germany. Gonyerite occurs in hydrothermal veins through skarn. 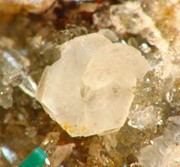 Named after Henrique Gorceix, a former French mining geologist, mineralogist, and Director of the School of Mines in Ouro Preto, Brazil. An uncommon, but widespread mineral found in localities in Brazil, Zimbabwe, Kenya, Guiana, along the Gold Coast, Sierra Leone, South Africa, Canada, the United States, Scotland, Switzerland, Australia, Tasmania, and others. It occurs almost always as a secondary mineral and is found in novaculites and other sedimentary rocks, carbonatites, hydrothermal argillic alteration zones, topaz greisens, fine grained soils, and as favas in diamantiferous river sand. 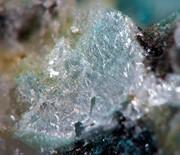 Named for the Sierra Gorda in Chile from which the mineral gets its type locality at the San Francisco mine in the Antofagasta region. Found in oxidized copper-zinc sulfide deposits, on weathered mine dumps, and on oxidized sea floor chimneys. Localities include, additionally, along the Juan de Fuca ridge south of Vancouver Island in Canada, Germany, Greece, Australia, Italy, and the United States.