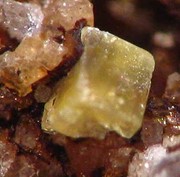 Found only at its type locality at Mont Saint-Hilaire in Quebec, Canada, Thomasclarkite is named for the Canadian Professor Thomas Henry Clark of McGill University in Montreal who studied the geology of the Mont Saint-Hilaire region.  Found in pegmatite dikes with associated intrusive alkaline-rich gabbro-syenite. Thomasclarkite is weakly radioactive. 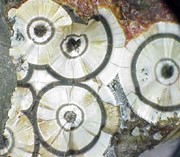 Named for the Scottish chemist and mineralogist Dr. Thomas Thomson, who first described and analyzed the mineral. Also called Thomsonite-Ca, Thomsonite has a strontium-rich analogue called Thomsonite-Sr. Thomsonite is a common zeolite found in many localities within fractures in igneous rocks, typically basalts as well as in contact metamorphosed rocks, alkalic igneous rocks, subvolcanic rocks, and occasionally as a cement on sandstones. Thomsonite is pyroelectric, meaning it can generate a charge temporarily when heated.

Named as a mineral with thorium (thor) in the composition that is similar, chemically to bastnasite. Thorbastnasite, typically spelled Thorbastnäsite, is found in just a few localities as a component in “albitite and quartz-muscovite veinlets in as alkaline exocontact surrounding a syenite intrusive.” Thorbastnasite is radioactive.