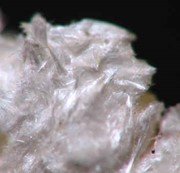 Named to honor German Cchemist Dr. Werner T. Schaurte of Johannesburg, South Africa. This rare mineral is found only at its type locality at the Tsumeb mine in Namibia as a secondary mineral in the ozidized zone of the dolostone hydrothermal metallic ore deposit found in association with germanite. Interestingly, the holotype specimen is now missing from the Technical University in Berlin, Germany. 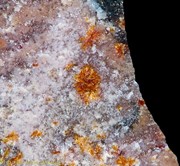 Named for Jakob Scheuchzer, a Swiss naturalist, junior physician, curator of the Kunstkammer, a cabinet of natural history and curiosities, and the chair-holder of physics and mathematics at the Universit of Zurich in Switzerland. It occurs at the type locality in the Fianel mine in Grischun, Switzerland, and at the Valgravegila mine in Liguria, Italy. At the type locality it is found in a metamorphosed syn-sedimentary exhalative manganese deposit where it is associated with saneroite and tiragalloite veins that resulted from the remobilization of ore components during retrograde Tertiary Alpine metamorphism. If appears as leppw-orange, aciclular, transparent crystals.