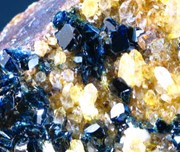 Named for the German word lazurstein, which is influenced by Medieval Latin, meaning “blue stone,” or possibly after the Arabic word for “heaven.” An uncommon mineral that occurs disseminated in quartzite, schist, and in quartz veins, in granite pegmatites, and as an alluvial and colluvial mineral. It can be found in Austria, Sweden, the USA, Canada, Brazil, Madagascar, and gem-quality crystals from Pakistan, among many other minor localities. 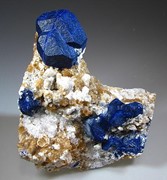 Named after the Persian word lazhward, meaning “blue,” and in reference to its similarity to azurite. The formation of lazurite is a result of contact metamorphism of limestones and can be found in Afghanistan, Russia, Tajikistan, Italy, the United States, Canada, Burma, and Chile, among some others. 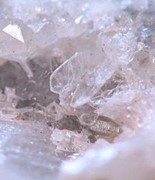 Named for its type locality at the Susanna mine at Leadhills in Scotland. Leadhillite is an uncommon mineral in oxidized lead deposits and in addition to Scotland, can be found in England, Austria, the United States, Namibia, and Australia among several others. Leadhillite can fluoresce a pale yellow under ultraviolet light. It will decompose in hot water. Heating will result in a reversible alteration to susannite.