Brazilian mineralogist Dr. William Florence is the namesake of the mineral Florenceite for his early analysis of the mineral. The varietal suffix is for the dominance of the element cerium over other rare earth elements. Florencite-Ce is uncommon, formed as an aplite weathering product in argillized igneous rocks, is authigenic in shale and sandstone, and forms as a reaction between guano-reacted water with gabbros. Florenceite Group has many localities but chemical analysis is required at many localities to determine which species is/are present. Confirmed Florenceite-Ce localities include in Brazil, Canada, Belgium, Wales, Chile, on Ascension Island, Namibia, Malawi, Australia, as well as in marine sediments, and other localities. 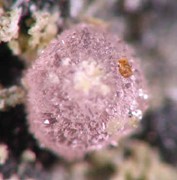 Named to honor Pierre Fluck, a mineralogist of the Louis Pasteur University in Strasbourg, France, and the first to find the mineral. Fluckite is a rare mineral of post-mine origin that forms as a low-temperature product of the reaction of carbonate gangue with arsenic solutions that were derived from arsenic. This environment occurs at the type locality in the Gabe Gottes mine in Haut-Rhin, near Sainte-Marie-aux-Mines, France. Other localities for Fluckite include in the Czech Republic at Jachymov in Bohemia, and in the United States at the Sterling mine near Franklin, New Jersey.