Named through the Greek word allasso, meaning “to change,” in reference to Allactite’s strong pleochroism. Allactite is a rare mineral that occurs as a secondary mineral in veins through a metamorphosed manganese deposits at its type locality at the Moss mine in Varmland, Sweden, and also in the metamorphosed zinc orebody at Franklin in New Jersey, USA. Aside from a few other localities in Sweden, Allactite can be found additionally only in Australia at the Iron Monarch mine. 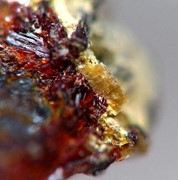 Named to honor Australian mineralogist Dr. Allan Pring. Allanpringite is a ferric iron phosphate that is found only at the type locality at Grube Mark near Essershausen in Hesse, Germany. It is closely related to wavellite and is associated with beraunite, cacoxenite, strengite, and cryptomelane. It appears as pale yellow-brown acicular crystals that are intergrown into bundles. 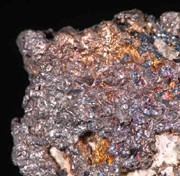 Named after the Greek word allos, meaning “another” and the Latin world for “silver,” argentum, in reference to the mineral composition. Allargentum is a rare mineral that occurs in high-grade silver-antimony ores in localities in Canada, the United States, Australia, France, the Czech Republic, Germany, Sweden, and Uzbekistan, among only a couple others. Allargentum is associated with silver that contains antimony and mercury, dyscrasite, breithauptite, domeykite, kutinaite, and stephanite.