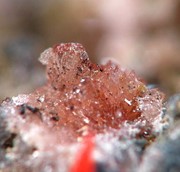 Named for its fleshy color and greasy, skin-like luster after the Greek word sarkinos, meaning “made of flesh.” Sarkinite occurs in its Swedish localities in metamorphosed orebodies of iron and manganese, in Austria in manganese lenses in marine-origin schists, and at Franklin, New Jersey in the United States in metamorphosed, stratiform zinc ores. Additional localities include Switzerland and others. 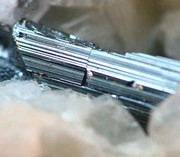 Named after Professor Wolfgang Sartorius von Walterhausen of the University of Göttingen in Göttingen, Germany, who was the first to describe the species. Sartorite occurs as a hydothermal mineral in dolostone at its type locality in Binntal, Switzerland. It also is found in Italy, the United States, and Peru as well as a few reported others. 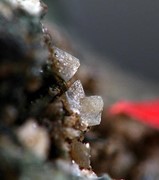