Named after the Greek word para, meaning “near”, and for being a dimorph of scholzite. Parascholzite is a rare mineral found in just a few localities including Germany and here in South Dakota at the Tip Top mine in the Black Hills, and also likely localities in Zambia, Australia, and Spain.  Parascholzite occurs as a secondary mineral and is a product of the alteration of phosphates in granite pegmatites.

Named for its polymorphic relationship to symplesite. Notable localities for Parasymplesite are at Sterling Hill near Franklin in New Jersey, USA, at Mina Ojuela near Mapimi in Durango, Mexico where it is found with other intermediate members of the kottigite-parasymplesite series, at Jachymov in the Czech Republic, at Wittichen and Weiler in the Schwarzwald Mountains in Germany, at Lolling in Carinthia, Australia, at Punta Corna in Piedmont, Italy, in Japan at Kiura in the Oita prefecture, and near Bou Azzer in Morocco. Parasymplesite appears as blue-green to green-black, waxy or oily acicular aggregates, and rarely as complex crystals. 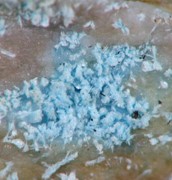 Named for the type and only locality at the Paratoo copper mine near Yunta in South Australia, Australia. It occurs there as pale blue sheaves and radiating sprays of bladed to tabular crystals, found in thin fissures in the country rock. Associated minerals include donnayite-Y, kamphaugite-Y, and bastnasite-La. It is a supergene mineral that precipitated from mildly basic carbonated groundwater. 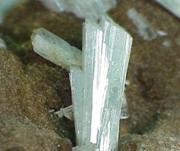 Named after the Greek word para, meaning “near”, and for it’s chemically similarity to vauxite. Paravauxite is a rare mineral found in hydrothermal tin veins and granite pegmatites in localities including in Bolivia, the United States, Mexico, Germany, Portugal, and Sweden among just a couple others. Paravauzite can be found in association with vauxite, metavauxite, wavellite, sigloite, crandallite, childrenite, and quartz. 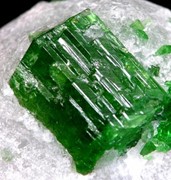 Named for its type locality at Pargas in the southwestern region of Finland. A somewhat uncommon mineral, Pargasite has many localities however quality crystals occur in only a few including in Finland, Sweden, Austria, Italy, the United States, Canada, and Pakistan. Pargasite forms as a component of hornblendes found in metamorphosed skarns of silicon-rich limestone and from andesitic volcanic rocks and altered ultramafic rocks.