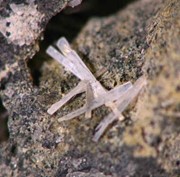 Named for the type locality at Laurium, also called Laurion, in Greece. Laurionite is a rare mineral that is “produced by the action of saline water on lead-bearing slag [and] in the oxidized zone of lead-bearing mineral deposits.” It can be found in, additionally, Italy, Germany, South Africa, England, Wales, Turkmenistan, Australia, and the United states, among a few others. Laurionite is slightly soluble in water, more so in hot water. 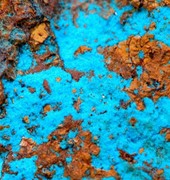 The name of Lavendulan was recently discovered to be a misnomer after the lavender color of the “type” specimen, which was later discovered to be a mixture and of no relation to the modern Lavendulan which has not been found to exhibit a lavender color. Lavendulan is an uncommon mineral in oxidized copper deposits and can be found in Germany, England, the Czech Republic, Scotland, France, Spain, Tunisia, Iran, Namibia, Morocco, Chile, Australia, and the United States. 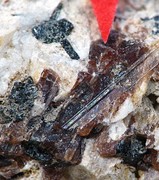 An uncommon mineral named after its type locality on Laven Island in Langesundsfjord in Norway. Lavenite occurs in alkali rocks and their related pegmatites and can be found, in addition to Norway, in Russia, Germany, Greenland, Guinea, the Cape Verde Islands, the Canary Islands, Canada, and in the United States.

Named after Professor Andrew Cowper Lawson, a Scottish-American geologist at the University of California in the United States. Lawsonite is an uncommon mineral that occurs at high pressures and low temperatures in regionally metamorphosed, low-grade, glaucophane-bearing schists. It can also form from plagioclase during its alteration to saussurite in gabbro and diabases and can be found rarely in eclogite. Localities include in the USA, localities in the French-Italian Alps, Turkey, Japan, New Caledonia, and on Celebes Island.