Named after Samuel Franklin Emmons, an American economic geologist formerly at the United States Geological Survey. Emmonsite is an uncommon mineral that occurs as a product of the alteration of tellurium minerals in oxidized, hydrothermal precious metal deposits. Localities for Emmonsite are in the United States including in the Clinton mine here in the Black Hills of South Dakota, Mexico, Honduras, Chile, and Armenia, among a few others.

Named for the Greek word enargis, meaning “vivid,” for its distinct cleavage. Enargite is a common and widespread mineral that occurs locally as an important copper ore. A few localities for well crystallized material include in Peru, Argentina, the Philippines, Taiwan, Japan, the United States, Austria, Italy, and Namibia. Enargite occurs in hydrothermal vein deposits and as a late-stage mineral in low-temperature deposits. 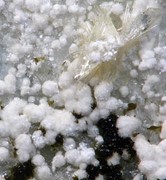 Named in honor of George Letchworth English, who was an American mineral dealer and collector from New York City, New York, USA. Englishite can be found only in the United States in three states: in Little Green Monster mine at the type locality in Clay Canyon, Utah, in Nevada at the Meikle, Carlin, Gold Quarry, and Redhouse mines in Nevada, and here in the Black Hills of South Dakota in the Tip Top mine. Englishite occurs in variscite nodules in the Little Green Monster mine, and in the complex granite pegmatite at the Tip Top mine. 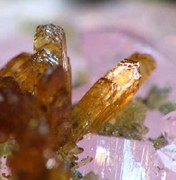 Named in reference to the minerals pink color, after the Greek word eosphoros, which directly translates to lucifer, which in Latin refers to the “morning star”, or the dawn. Eosphorite is an uncommon mineral that is found in phosphate-bearing granite pegmatites, typically as a secondary mineral. Localities for Eosphorite include in: the United States which includes here in the Black Hills of South Dakota in the Tip Top and Hugo mines, Germany, Finland, Brazil, and Australia, among others. Associated minerals include rhodochosite, lithiophilite, triplodite, dickinsonite, albite, cookeite, apatite, beryllionite, hydroxylherderite, and tourmaline.