Named to honor Carl Frederik Jarl, who was the former President of the Danish Cryolite Company, and was the first to note the mineral. Jarlite can be found in vugs in cryolite deposits along with other fluorides. It occurs only in the Ivigtut Cryolite deposit in the Kitaa Province of Greenland. 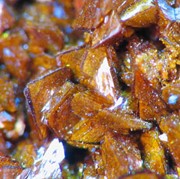 Named after the Barranco del Jaroso in Spain, from which the first studied specimens came from. Jarosite is a widespread and relatively common mineral that occurs “as a secondary mineral in oxidized portions of sulfide-bearing rocks, typically altering from pyrite” as well as less commonly in low-temperature hydrothermal deposits, including those around hot springs, as a primary mineral. Localities for well studies Jarosite specimens include in Spain, the Czech Republic, Germany, Greece, the United States, Mexico, Chile, and Russia. Jarosite is strongly pyroelectric, generates a charge in response to heat.

Named for Mrs. Jean Bandy of Arizona, USA who translated Agricola’s De Natura Fossilium from Latin, along with the help of her husband Mark Bandy. Jeanbandyite is a rare mineral that can be found only in localities in Bolivia, Mexico, Canada, and newer localities in England. It occurs in oxidized zones of polymetallic hydrothermal deposits. 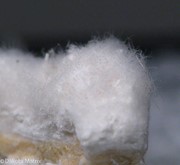 Named to honor Colonel Clarence M. Jenni who was Director of the geological Museum at the University of Missouri at Rollo, USA and was the discoverer of the mineral. Jennite is a rare late stage mineral that occurs partially filling open spaces and veins in fractured skarns. It can be found in the United States, Italy, Germany, Israel, South Africa, and Japan. 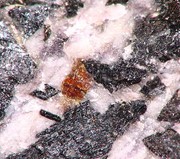 Named after the Jinshajiang River in China, nearby which lies the type locality at the Luku Rare Earth Element deposit. It is a rare mineral that occurs only at its type locality and at Norra Karr in Sweden. It occurs in arfvedsonite dikes in alkalic syenite. Additional associated minerals include albite, afrvedsonite, aegirine, pyrochlore, monazite, and chevkinite.

Named after the Joaquin Ridge near the type locality at the Dallas Gem mine in California, USA. Joaquinite is a rare mineral that occurs in natrolite veins that cut glaucophane schist inclusions within serpentine as well as in fenitized gneiss and alkalic syenite. It can be found in other USA localities, Canada, and Greenland among just a couple other localities.