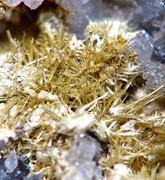 Named for the chemical constituents of ferric iron (ferri), which is iron with the oxidation number 3+, and molybdenum (molybd).  Somewhat uncommon but widespread, Ferrimolybdite can be found in small amounts and as well studied material in localities in Russia, Belgium, the United States, Australia, and China, as well as numerous other, less well studied localities. It occurs in oxidized molybdenum-bearing hydrothermal vein and porphyry deposits as a secondary mineral.

Named as the Fe2+ analogue of ericssonite. It occurs only at the co-type localities at the Esquire No.7 and Esquire No. 8 claims along Big Creek in California, USA. It crystallizes late in a sequence of minerals that resulted from fluid interaction with quartz-sanbornite veins along the margin of the vein and the country rock. It is associated with anandite, bazirite, celsian, devitoite, quartz, and titantaramellite. It appears as dark red-brown masses composed of irregular, undulating, striated, bladed crystals.