Named as an analogue of agardite-Y which in turn was named in honor of Jules Agard, a geologist with the Bureau de Recherches Geologiques et Minieres in Orleans, France, and for the dominance of neodynium over the other rare earth elements. Notable localities for Agardite-Nd include at Gengenbach, the Clara mine, and Wittichen in the Schwarzwald Mountains in Germany, Wheal Alfred in Cornwall, England, and at Osenovlak near Sofija in Bulgaria. A few other localities are known.

Named for engineer of the Mineralogy Laboratory of the French Atomic Energy Commission in Paris, Henri Agrinier. It is a rare mineral that can be found only at the Margnac mine in Compreignac in Haute-Vienne, France, where it occurs in an oxidized uranium deposits in association with uranophane and gummite. Agrinierite is highly radioactive. 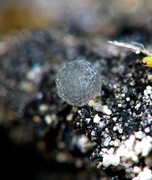 Named in honor of Allen V. Heyl, an economic geologist with the United States Geological Suvey. Aheylite is a rare mineral that can be found at the type locality at the Huanuni mine in the Oruro Department of Bolivia, at Bali Lo in the Ashburton Downs of Western Australia, Australia, and possibly at the Les Montmins mine in Auvergne, France. At the type locality, Aheylite is found as a hydrothermal mineral in the base metal tin deposit in association with variscite, sphalerite, vivianite, wavellite, cassiterite, pyrite, and quartz.