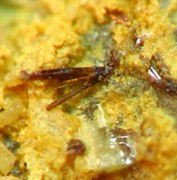 Named after Dr. Josef Zemann, a crystallographer and specialist in tellurium minerals and a Professor of Mineralogy at the Univeristy of Vienna in Vienna, Austria. Found in four localities worldwide according to mindat.org, the Moctezuma mine in Mexico boasts as this mineral’s type locality. This rare mineral is found at Moctezuma as a “secondary mineral in the oxidized zone of a hydrothermal Au-Te deposit.” 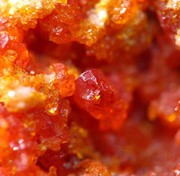 Named for the Zinc in its composition, crystals of this mineral are rare and as a result synthetic crystals are widespread. Relatively common, Zincite is a primary constituent of metamorphosed orebodies such as the stratiform zinc deposit of Franklin and Sterling Hill in New Jersey, USA. Also found as an altered, secondary mineral in oxidized zones of ore deposits rich in zinc. Additionally, Zincite is product of volcanism. Interestingly, Zincite is found at the Tonopah-Belmont mine in Arizona, USA as the result of a fire in the mine. Rarely, Zincite will fluoresce pale yellow under long-wave ultraviolet light.