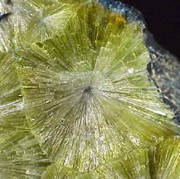 Discoverer of Wavellite, English physician William Wavel has the honor of its namesake. Wavellite is associated with crandallite and variscite as a seconday mineral in metamorphic rocks of low-grade as well as in phosphate deposits and rarely in hydrothermal veins. Wavellite is found worldwide in many localities. Readily dissolved by acids.

IMA 2015-124. Type Locality - Commercial quarry, Crestmore, Sky Blue Hill, Riverside Co., California. Wayneburnhamite is the calcium anologue of Ganomalite and is isostructural with Ganomalite. Crystals occur on vesuvianite/wollastonite matrix and is presumed to have formed during metasomatism of galena impregnated limestone as a result of intrusion of quartz monozite. Wayneburnhamite forms sky blue, short prismatic hexagonal crystals to 0.5mm and clusters. The margins of the crystals are transparent while the cores are cloudy. The blue color is attributed to nonessential copper impurity. Wayneburnhamite is named for Dr. C. Wayne Burnham (1922-2015), who is best known for his work on the interaction of volatiles with igneous systems. Burnham also contributed to the understanding of the Crestmore geology and metamorphism. Most mineral collectors would also recognize Wayne Burnham as a co-founder of "Burminco", a mineral business partnered with his brother George. 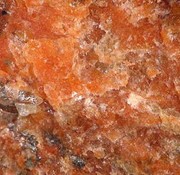 Theobald Weber is the namesake of Weberite as one of the developers of the Ivigut cryolite deposit in Greenland. Weberite occurs in cryolite deposits. Found in only a few locations worldwide: Greenland, the USA in Colorado and Nevada, Australia, Ukraine, among a couple others. Weberite is somewhat soluble in water. 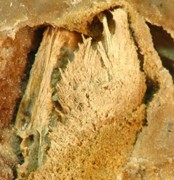 Named for the first discovered occurrence in the Weddell Sea of Antarctica. This authigenic mineral is a constituent of bottom muds, peat sediments, calcareous lake sediments, and may be formed as part of a reaction of lichen-produced oxalic acid and calcite. Additionally, it can be formed from bat guano and is a known component of human kidney and bladder stones. Weddellite can be found in few, but widespread localities. Weddellite will desiccate to whewellite upon atmospheric exposure.