Named after the Greek for “fibers,” ines, in reference to its common habit. Inesite is a late-stage mineral in hydrothermal manganese deposits, and it occurs in Germany, Sweden, Romania, Slovakia, South Africa, the United States, Australia, Japan, and a few other localities. Associated minerals include rhodochrosite, bementite, hausmannite, datolite, pectolite, apophyllite, ruizite, orientate, and quartz. 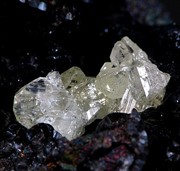 Named for the composition of iodine (iod) and silver, after the Greek word argyros (argyr). Somewhat uncommon, Idoargyrite can be found in abundance or of good quality in localities in Mexico, the United States, Chile, Australia, Germany, Spain, France, and Kazakhstan. Iodargyrite forms as a secondary mineral in oxidized silver-bearing deposits. 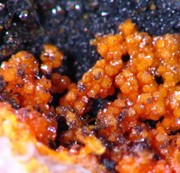 Named after the type locality at Sebarz mine in the Esfahan province of Iran. Iranite is a rare mineral that occurs only in localities in two other countries: Chile, and the United States. Iranite is found in oxidized lead-bearing hydrothermal deposits. Assocaiated minerals with Iranite include dioptase, fornacite, wulfenite, mimetite, cerussite, and diaboleite.