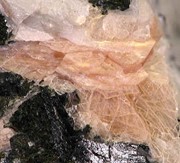 Named for Rauf Baratovich Baratov, a Soviet petrologist at the Institute of Geology in Dushanbe, Tajikistan. Baratovite is a rare mineral that occurs as a accessory in quartz-albite-aegirine veinlets, and fine-grained in aegirine syenites in association with miserite, ekanite, titanite, quartz, albite, aegirine, pectolite, sugilite, allanite, andradite, zircon, and apatite. Localities include in Tajikistan, Japan, and Kyrgyzstan. 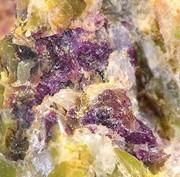 Named after the type locality in the Barberton district in the Mpumamanga Province of South Africa. Barbertonite is a rare mineral with additional localities in Australia, New Zealand, Scotland, and the Czech Republic. It occurs as an alteration product of chromite in serpentinite in association with stichtite, chromite, and antigorite. Barbertonite has a distinct greasy feel to it.

Named in reference to the composition as the barium analogue of the mineral pharmacoalumite. It is a rare mineral that occurs at the type locality at the Cap Garonne mine near Var in France, as well as in the La Gande mine in Coquimbo, Chile, among a couple other localities. It appears at the type locality as pale yellow cubes that are interpenetrating.

Sometimes also called Barium-pharmacosiderite, this mineral is named in reference to the composition which is barium-dominant,and for the relation to pharmacosiderite. Localities include in the Tintic ore district in Utah, and at Sterling Hill in New Jersey and in the Burrus mine in Nevada, USA, at the type locality in the Clara mine and other German localities including in the Schwarzwald Mountains, and Aschaffenberg in Bavaria. It can be found in association with arsenopyrite in tourmaline at Zablaticko, and in Tertiary sandstone in Kralovske Porici in the Czech Republic.