Named for the Greek word ainigma, meaning “a riddle” and also the root of the common word enigma, in reference to the mineral’s, at the time, unknown or uncertain chemical composition. Aenigmatite is an uncommon mineral that is often a primary constituent of sodium-bearing alkalic volcanic rocks, pegmatites, and other igneous rocks that are silica-poor. Localities for Aenigmatite include in Greenland, Russia, Norway, Italy, the United States, Australia, and New Zealand, among many others. 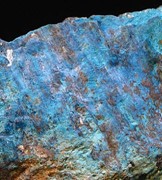 Named after the Greek word aerinos, meaning “airy,” in reference to the mineral’s typical sky blue color. Aerinite is a rare mineral that occurs at its French locality at Saint Pendelon as “a hydrothermal mineral of the zeolite facies, formed at relatively low temperatures in fractures cutting mafic igneous rocks” in association with prehenite, scoleite, and mesolite. Additional localities for aerinite include in Spain and the United States. 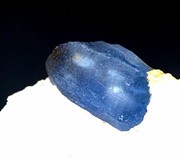 Named after the country in which it was discovered, Afghanistan, where it can be found at the type locality in Ladjuar Medam in the Badakhshan Province. Additional localities for Afghanite are located in Russia, Tajikistan, Italy, the United States, and Canada, among only a couple others. Afghanite occurs at the type locality in veinlets cutting lazurite, and in Italy in siliceous limestone xenoliths in pumice. 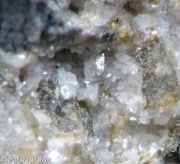 Named for the Association Française de Microminéralogie (AFM), this rare hydrated aluminum phosphate was described by Anthony R. Kampf, Mills, Rossman, Steele, Pluth and Favreau in in 2011 in the European Journal of Mineralogy (23, 269-277). According to the authors "Afmite forms in cockscomb aggregates of diamond-shaped tablets on {001}, ubiquitously contact-twinned on {001}". Afmite has a distinct pearly luster. 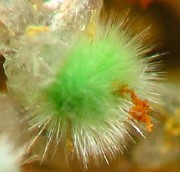 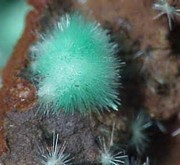 Named as an analogue of agardite-Y which in turn was named in honor of Jules Agard, a geologist with the Bureau de Recherches Geologiques et Minieres in Orleans, France, and for the dominance of lanthanum over the other rare earth elements. Agardite-La is a rare mineral that can be found in small amounts in oxidized hydrothermal polymetallic mineral deposits in localities in the United States, Greece, England, Germany, and Italy, among only a few others.