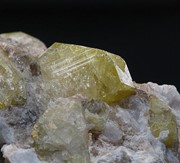 Larger yellow crystals of Londonite to 1cm on pegmaite matrix. Londonite is a rare cesium beryllium oxide and named for Dr. David London of the University of Oklahoma. Dr. London's area of research centers around granitic pegmatites and the chemical evolution of felsic magmas. His book "Pegmatites" published in a "major treatise on pegmatite science" according to Robert Martin, Editor of Canadian Mineralogist. Londonite according to Dr. London exhibits complex zoning. David said based on his experience: "...the 50+ londonites I have analyzed from Antsogombato. They exhibit complex internal zoning that averaged about Lon50:Rho (Rhodozite) 50. BUT the rims are distinctly Lon-rich, from Lon60:Rho40 and up. So, in terms of bulk average and WYSIWYG, they are londonite".