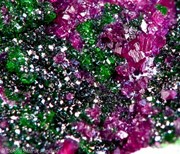 A member of the Garnet Group, Uvarovite gets its name from the President of the Academy of Sciences in St. Petersberg and Russian nobleman Count Sergei Semenovich Uvarov. Uvarovite can be found as an alteration mineral of chromite-bearing serpentinite as well as in response to a reaction between dolomite and chromite in metamorphosed limestone and skarn. It is an uncommon garnet, but with several localities including Russia, exceptional crystals from Finland, Spain, Canada, the United States, Taiwan, and Turkey, among others. The name “Uvarovite” is occasionally used to describe chromium bearing garnets or green garnets of other species, however this is a misnomer.