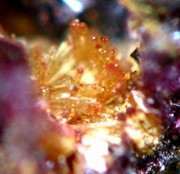 Jahnsite - (NaFeMg) occurs in at the Tip Top pegmatite west of Custer, South Dakota. Thus far it has been a one-time find. Crystals occur as 1mm pseudo-orthorhombic twinned prisms to 1mm in tiny vugs within Heterosite with dark purple Leucophosphite and Dufrenite. The crystals are translucent yellow with orange bands near the termination. Two other new Jahnsites (NaMnMg) and (CaMgMg) are present in the crystals but can be characterized due to insufficient volumes.

Special Info
Type and Only locality


Tiny 0.1 to 1mm, twinned, prismatic yellow crystals with orange terminations.  Anthony Kampf described these crystals as having five different chemical zones.The center portion of the crystal, which is the central part of the yellow zone just below the orange band is Jahnsite (NaFeMg). The base, which isn't shown in the photo is the yet to be described Jahnsite (NaMnMg). The orange band I believe to be the original Jahnsite (CaMnMg) and the above the band is the again Jahnsite (NaFeMg) which finally phases into another new, not yet described Jahnsite (CaMgMg) at the tip. According to Kampf et al (2008), 80% of the crystal by volume is Jahnsite (NaFeMg). There were insufficient amounts of crystal to perform the necessary work to fully describe the other two new Jahnsites.