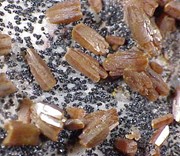 A relatively common mineral, Vanadinite is named for its vanadium content. It is found in many localities worldwide as a secondary mineral in oxidized lead-bearing deposits as the vanadium is leached from the wall-rock. Vanadinite was discovered even prior to the discovery in vanadium in Mexico at its type locality of Zimapán, Mexico. Interestingly, the type material for vanadinite was lost at sea.

Tight cluster of lustrous brown, curved Vanadinite crystals to 8mm. Nice piece from a not-too-common Montana locale. This specimens were very limited and we have not seen many more on the market.

From the our recently acquired collection of David Hess, a long time Western Illinois University professor.

Exceptional, well crystallized specimen of Vanadinite from this locality known for it pyramidal terminations. This piece features two long crystals to over 1.3cm each with numerous smaller crystals.

The platy, box-work matrix is covered by micrscopic, flaming orange Desclozite and perched about are long, acicular silvery Vanadanite crystals to 1mm. Most of the Vanadinite though measures less than 0.5mm.

Bright red, hexagonal crystals from 5 to 12mm across.

Older specimen which came from the stock of the late Richard Bideaux. The specimen has hundreds of yellow to orange 0.5 to 1mm Vanadinite crystals lining much larger Quartz crystals. The backside reveals some Galena in the matrix, which contains the lead, essential to the formation of Vanadinite.

Barrel-shaped hexagonal crystals to 2mm in clusters across matrix.

Light orange 1-8mm crystals of Vanadinite. The larger crystals are those on top and have flattend, tabular apperance.

Large prismatic crystals to 1cm tapering to a point.