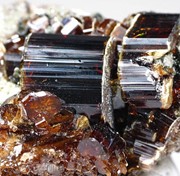 Named for the locality of its discovery at Mount Vesuvius in Italy. Vesuvianite is formed within skarns that formed as a result of regional or contact metamporphism of limestones, and in gabbros containing garnet, mafic and ultramafic rocks as well as serpentinites. Vesuvianite is found in over 1,000 localities worldwide. Sometimes called idocrase.

Doubly terminated deep red prismatic Vesuvianite with black Andradite (melanite) garnet. A paper in the American Mineralogist v. 51 page 381 states that these Vesuvianites are rich in cerium and other rare earths.

An olive green sharp euhedral crystal to 1.5cm across in blue Calcite.