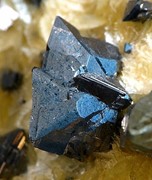 Named after its commonly tetrahedral crystals, Tetrahedrite occurs “in hydrothermal veins or contact metamorphism deposits of low to medium temperature of formation.” One of the most common sulfosalts, Tetraherite is found in thousands of localities worldwide.

Highly sought after are specimens such as this one from the Herodsfoot mine. As is typical from Heredsfoot, Tetrahedrite crystals are coated with Chalcopyrite. This specimen is no exception with 10 or 12 Tetraherite crystals from 5mm to 1cm in size. All are coated nicely with Chalcopyrite. The matrix is Galena. Comes with a David New label.
Click thumbnail images for larger view.

There are two Tetrahedrite crystals, the best to 6m, on this specimen with mostly mal-formed Galena and some Siderite.

Rich specimen loaded with tetragonal crystals of dark steely grey Tetrahedrite to about 1cm on a matrix of Sphalerite.

This specimen was acquired by Hampson in 1960. The mine is located just southwest of Silverton, practically in town. This chunk of ore is pretty cool as the Tetrahedrite composes most of the matrix with a nice dull, metallic, and silvery luster and gives a nice reddish brown streak. There is also Chalcopyrite, Pyrite and Galena in the matrix.