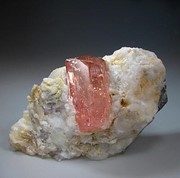 Named for an island in the Red Sea that was referred to as Topazios or Topazion, and is called St. John’s Island today. The name of the island itself refers to its difficulty to be found, as Topazion means “to seek” in Greek. The island was not known for the mineral Topaz, however, and any reference to Topaz in ancient texts actually translates to the yellow green olivine variety peridot.  Topaz can befound in veins and cavities within granites, pregmatites, rhyolites and is formed from hot, volatile, hydrothermal fluids. It can also be found in high-grade metamorphic and as a detrital mineral. It can be found in thousands of localities worldwide. Topaz can, albeit rarely, fluoresce under ultraviolet light. Topaz from certain localities must be kept away from sunlight, such as the brown variety from Baldface Mountain, New Hampshire, USA and the sherry-colored crystals from The Cove, Utah, USA, as the color may fade with exposure.

A nice thumbnail size group of Topaz, with I suspect rutile inclusions since there are thousands of minute, acicular dark red or black crystals surrounding the exterior of the Topaz and on the matrix. The longest Topaz is doubly terminated and 1.7cm.

Hard yellow replacement feldspar by Topaz. It is locally called pyknite and is associated with Fluorite, Quartz, and a green mica.

A complexly crystallized sherry colored Topaz crystal showing many faces. It is a floater.

A colorless, terminated crystal of Topaz with minor Siderite on the termination. Collected by Chris van Laer in 1989.

This is an excellent Topaz crystal group collected by the late Chris van Laer in 1989. It is a group of four colorless crystals with good luster and striations, and each nicely terminated. It was professionally reconstructed by Chris and shows no sign of it.

This is a sharp group of Topaz crystals with a light goldish color, clear and all nicely terminated with a little bit of 1-2mm Spessartine crystals. It was collected by Jack Zektzer in 1984 and purchased by Chris van Laer. An excellent specimen.

A white, hard, porcellanous mass of Topaz. Comes with a University of Copenhagen tag.

An outstanding combination and incredibly hard to obtain colorless Topaz with dark smoky Quartz. Both are nicely terminated with no damage. Excellent specimen.