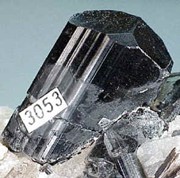 A Tourmaline group mineral named for the Old German word schürl, a word of unknown derivation which may mean “impurities,” or may be in reference to an old German village called Schorl, now called Zorschlau, which had a nearby tin mine that contained Schorl. Schorl is the most common of the tourmalines and can be found in many localities, but a few know for exceptional specimens include Germany, England, Italy, Russia, the USA, Mexico, Brazil, Namibia, and Afghanistan. Schorl is a common constituent of granite and granite pegmatites, can be found in hydrothermal veins and metamorphic rocks, and is occasionally found as a detrital mineral. Schorl is pyroelectric, has a charge when heated, and piezoelectric, forms a charge in response to pressure.

This is a cap from a larger prismatic crystal with an extreme pyramidal termination not generally seen in large crystals of tourmaline like this.


Stubby, striated Schorl crystal with TEN faces on the termination. From this area, it is an excellent specimen from the miarolitic cavities.