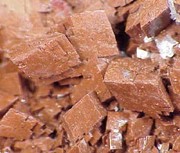 Named after the Greek sideros, meaning “iron,” in reference to the iron in the composition. Quite common with thousands of localities, Siderite is found as a constituent of sedimentary bedded iron ores and metamorphic iron formations. It can also be found in association with metallic hydrothermal veins as well as in carbonatites, concretions, and occasionally in pegmatites. Siderite is paramagnetic, can be attracted in the presence of an externally applied magnetic field.

Note: For a closer representation of the color see the close-up photos. It's is a brownish yellow color.

A recent Mineralogical Record article (v. 43 n. 1) authored by Gunther Neumeier descibed the Neudorf district, located in the lower Harz mountains of Saxony-Anhalt, Germany. Mining at Neudorf's lead-zinc-silver mining district dates back to the 10th century and was one of the most important and productive districts in the area. Specimens were collected dating back to the early 1800's, most notably Boulangerite, Galena, and Siderite to which the district is most famous. August Krantz (1809-1872) was a notable mineral dealer of Neudorf specimens. This specimen carrries the label from Friedrich Krantz (1859-1926), August's nephew.

A large impressive cleaved mass of dark brown SIderite occuring with specular Hematite and some Pyrite. A nice specimen from this mining area historically important to the upper midwest economy.

Siderite from Tsumeb mine, Tsumeb, Namibia

This was originally labeled as Beudantite. However, I am sure it is amber brown, scalenohedral Siderite to 4mm. It is drop dead gorgeous under the scope.

An old-timer from the University of Chicago with tag purchased by Charles Noll from another collector. It is handsome specimen with large curved rhombic crystals to 9mm topped off with Chalcopyrite crystals to 1cm.