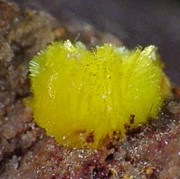 Sometimes referred to as Uranophane-alpha, Uranophane is named for its uranium content and for the Greek word phainesthai, meaning “to appear” as its composition was originally under some scrutiny as being accurate. Uranophane is quite common, a secondary mineral in uranium deposits and formed by the alteration of uraninite. It can also be found “as coatings, presumably through deposition from meteoric waters.” There are hundreds of worldwide localities, but only a few have excellent crystals or large quantities. Uranophane is highly radioactive. Crystals will fluoresce weakly under ultraviolet light, but massive Uranophane is typically not fluorescent.

Superb bright yellow, acicular, glassy, crystals of Uranophane to around 1mm and less. Other species present.