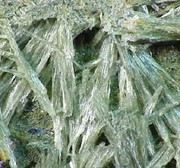 Named for Raphael Pumpelly, a United States geologist and forerunner in the study of the paragenesis minerals in copper deposits in the Keweenaw Peninsula in Michigan, USA. Additionally named for its magnesium content over other minerals. Other members of the Pumpellyite Group include Pumpellyite-(Fe2+), (Fe3+), (Mn2+), and (Al). Somewhat uncommon, but widespread, Pumpellyite can be found in low-grade metamorphosed vesicular basalts and diabases, as well as in glaucophane schist and greywacke. Localities include Michigan and California in the United States, Scotland, England, Norway, Germany, Austria, the Czech Republic, Italy, Japan, and the South Island of New Zealand.