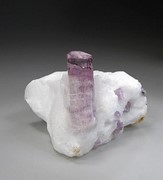 Named for the Greek words skapos, meaning “digger,” and lithos, meaning “stone.”Scapolite is one of the transitional members of the Marialite-Meionite series, and the term will generally be used to refer to the series, not the Scapolite Group. It appears as colorless to pale yellow, yellow, brown, violet, pink, etc., prismatic crystals, or as granular or massive. Scapolite will fluoresce yellow to orange under both short-wave and long-wave ultraviolet light. Scapolite is “a characteristic mineral, formed during regional metamorphism, under conditions of the almandine amphibolites metamorphic facies and of the granulite facies,” as well as during regional and contact metamorphism that is connected to metasomatism. It can be found in pegmatites cutting serpentinite, marble, or skarn, hybrid pegmatite-like rock, skarn, calc-silicate hornfelses, metamorphic marble, and in altered gabbro and nepheline syenite. There are hundreds of widespread, worldwide localities for Scapolite.

Well formed, beautiful lilac colored, gemmy Scapolite to 2.5cm on a marble base.