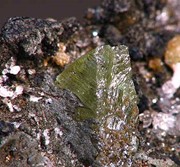 Named in reference to its color and, some argue, its appearance after being ignited, after the Greek spodoumenos, meaning “burnt to ashes.” The gem varieties of Spodumene, hiddenite and kunzite, are named for mineralogist William E. Hidden and a former mineralogist at Tiffany & Co., George Frederick Kunz, respectively. Interestingly, the town of Hiddenite in North Carolina, USA is named after the mineral hiddenite and not the other way around, as many believe. Spodumene, an important lithium ore, is a common mineral in lithium-bearing granite pegmatites and can also be found in aplites and gneisses. Spodumene has hundreds of localities, but one of the more interesting ones is right here in the Black Hills of South Dakota. The Etta mine near the town of Keystone is known for its giant crystals of spodumene.  Crystals of over 14 meters (47 feet) have been reported!

Green variety of gem quality Spodumene. Hiddenite was named after W. E. Hidden, the discoverer of the deposit near Stony Point. Later the nearest post office and railroad station was renamed "Hiddenite", after the Hiddenite mine. 5-10mm, gemmy Hiddenite crystals.

A large cleaved chunk of this important lithium mineral found in granitic pegmatites.

This is an interesting pegmatite mineral in which Spodumene occurs as 1-2cm crystal blades with Quartz (or pollucite) with abundant sulfides including Pyrrhotite and silvery Bismuthinite.