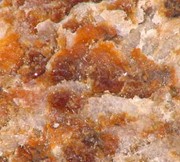 Named for Hans Ramberg, a Professor of Mineralogy at the University of Chicago in Illinois, USA, and then at the University of Uppsala in Sweden. Appears as brown to red thick, hexagonal tablets or as hexagonal pyramids. Found in an amphibole skarn at the type locality in the Garpenberg Norra mine in Dalarna, Sweden. It can also be found in a uranium ore deposit where it occurs as a late mineral along with gypsum, ettringite, bazhenovite, and hannebachite in the Lichtenberg Absetzer mine in the Ronnaberg U deposit in Thuringia, Germany. Additional, newer localities can be found in Japan at the Hirogawara mine on Honshu Island, in China in the Luobusha ophiolite in the Shannan prefecture, and at Gotland Deep in the Baltic Sea.