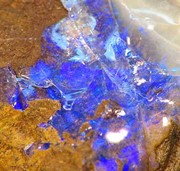 The name for Quartz is believed to be first applied in the Middle Ages to gangue in Saxony, Germany, however the word itself is of obscure origin. Quartz in the most abundant mineral on the surface of the Earth and can be found in a number of environments including hydrothermal veins and metallic deposits, within granites and granite pegmatite, in sandstones, quartzite, and in carbonate rocks. There are hundreds of varieties of quartz which include chalcedonies, agates, and jaspers among others that differ in color, habits, inclusions, and impurities. There are tens of thousands of localities for quartz. Quartz is piezoelectric, develops a charge in response to pressure, and pyroelectric, develops a charge in response to heat and can also be triboluminescent, meaning it can generate light when broken.

Large pink or rose Quartz in a good crystal group with the largest at 1cm. This is a good clean specimen of rose Quartz from probably one of the best locailties in the worls.

A group of two amethyst crystals side by side.

Colorless needle-like crystals of Quartz the longest to about 2.5cm with cubes of Pyrite on Sphalerite matrix.

A very dark smoky Quartz crystal floater. It really doesn't get much smokier than this! Poor photos but very nice in-hand. No damage. A good locality specimen.

Just a nice cluster large cluster of Quartz crystals, the largest to 4cm with white Dolomite.

Amethyst: This is a complex Quartz crystal with a lot of growth features to keep you busy studying exactly how it was formed. It is not a total floater with maybe an detachment point and is mostly amethyst with smoky at the base. The termination is better on the amethyst end and shows cavernous or negative growth with inclusions of a white clay. The prism faces are short.

Smoky: Also found in the miarilitic cavities of the Boulder Batholith and collected by the late Chris van Laer. It is a good combination specimen with a small black Schorl crystal to 1cm. The smoky Quartz is 4cm and perched nicely on a Microcline crystal. The first photo is a good example of the color, while the others show you the crystal forms.

Amethyst: A very complex specimen with numerous doubly terminated crystals of both smoky and amethyst Quartz. All the crystals are in parallel growth. One end seems to be smokier than the other, which is more amethyst. Much of it seems to be in sceptor growth. The index catalog card from Chris's collection states that it was collected by Zach Johnson in 2004.

Two very dark smoky Quartz crystals side-by-side, the longer one is 3.5cm. It is very lustrous, which does not show well in the photos. Collected by Chris van Laer in 1986.

Excellent specimen of light smoky Quartz with a darker phantom in both crystals. There are two parallel smokies, the largest is to 3cm. It is very lustrous.

Several crystal specimens with deep amethyst color strongly zoned at the pyramids and some doubly terminated.

Nice aesthetic specimen with discoidal crystals of Ankerite to 9mm with waterclear Quartz. The largest Quartz is 3cm.

Gemmy amethyst with shades of smoky scepter crystal. The clarity and color is great.

A very dark smoky Quartz single crystal with nice straitions and interesting terminations on both ends.

A single roughly doubly terminated amethyst tipped crystal with interior smoky color. One end is well terminated with the other end roughly terminated with a small attachment point. The overall crystal is also shows a offset growth of another crystal. Collected by Chris van Laer in 2000.

A scepter overgrowth of rich purple amethyst over a smoky Quartz. Very nice.

Scepter with smoky in the neck and purple amethyst in the head. The amethyst is a good deep purple color and shows color zoning and clarity.

A beautiful specimen of rich red and greayish blue cut and polished Roselle agate. It is rough on one side.

This is out of the June Culp Zeitner collection parts of which I obtained when she was still alive.  I don't know the exact location but it is out there somewhere. If you dig through her hundreds of articles you may find it. These pieces are a nice blue color. Most chalcedony out there is a dull grey or milky and colorless.


Deep to light purple amethyst crystals in stacked and paralled growth on smoky Quartz. It is a fascinating specimen especially held up to a light and turning it about its axes. Collected by Chris van Laer in 1987.

Also an interesting specimen with a dark smoky, frosted stem capped by a purple amethyst about of equal width. 2.5cm.

A very nice scepter of amethyst over a thin colorless Quartz stem. Collected by Chris van Laer in 1992.

Double headed scepter, almost colorless, but with a slight amethyst color. Very excellent and rare. Collected by Chris van Laer himself in 1979.

An excellent specimen 2.5cm long, doubly terminated on the stem and the head scepter. The scepter is a very nice gemmy color. Collected by Chris van Laer in 1979.