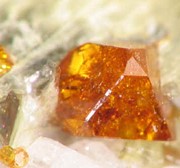 Refers to a group of minerals, named for the Greek word micros, meaning “small,” as the crystals from the type locality at Clark Ledge in Massachusetts, USA are typically quite small. Microlite has a few hundred localities but only a few are known for large crystals. It occurs in lithium rich granite pegmatites including here in the Black Hills of South Dakota in the Tin Mountain, Shamrock No. 1, White Cap (King Lithia), Peerless, and Bob Ingersoll mines in the United States. Microlite can also be found replacing tantalum minerals in these pegmatites and in crystal lined granite cavities. On occasion, Microlite can be radioactive.