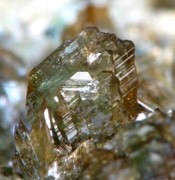 Previously called Manganaxinite, this mineral is named for the dominance of manganese in the chemical formula and as a member of the Axinite Group, which in turn received its name from the Greek word for “axe” in reference to the sharp crystal habit. Axinite-Mn is an uncommon mineral that is formed by contact metamorphism and boron metasomatism, and can also be found in pegmatite veins in contact with metamorphosed iron formations and gabbro. Localities for Axinite-Mn include Germany, Ireland, Italy, the United States, Cananda, and Japan, among others.