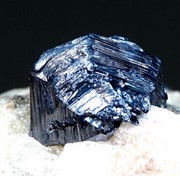 Named for the molybdenum content which in turn derives its name from the Greek word molybdos, meaning “lead,” in allusion to its lead-like color and metallic luster. Molybdeinte is a common, widespread mineral and is the most abundant molybdenum-bearing mineral that occurs as excellent crystals in localities in the United States, Canada, Norway, Russia, Germany, Morocco, Australia, and Japan. It occurs on the rare occasion in meteorites, but more commonly in contact metamorphosed limestone, pegmatites, granites, aplites, disseminated prophry deposits that sometimes are associated with major copper mineralization, and in high-temperature hydrothermal vein deposits. Molybdenite has a notably greasy feel to it.

This specimen shows good colloform habit of Quartz veins lined with flakes of Molybdenite and Pyrite.

An interval of diamond drill hole #1: at 182 ft, 334 ft, and 418 ft. I believe these splits represent one of the ten holes drilled by Noranda in 1974 after discovery in 1967. Goat Creek is a large, deep low grade Molybdenum deposit with skarn mineralization, including tungsten. Mineralization was in the Belt strata of the Wallace Formation and within a highly differentiated, non-outcropping Tertiary pluton (J. E. Worthington of the Idaho Geological Survey). The core shows good mineralization of Molybdenite and Pyrite in Quartz veining.

A chunk of ore from this huge Molybdenum deposit showing excellent thin veinlets of Molybdenite in stockwork style mineralization. There is a wealth of information on this deposit, which was discovered in 1974.

This is a good representation of the chief ore of molybdenum. It is silvery metallic with a tinge of blue and weighs about 16 oz. Veins can be seen in the sample from 1-20mm.

Because of it's high melting point (2,620 deg. C), it is used primarily in metallurgical applications for harding steel as well as lubricant, petroleum refining, flame retardents, and in the glass and ceramics industries.

Molybdenite with a good crystal to 1.5cm in a pocket of Quartz and Epidote.

Simply, an ore specimen with flashy soft radial crystals and masses of Molybdenite in a Quartz vein.

Ore specimen with a healthy dose of bluish silver Molybdenite.

Very silvery masses of Molybdenite to 2cm in granite matrix. This is a most unusual locality. Comes with a Kidwell and a University of Malaya labels.