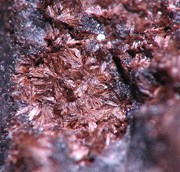 Name in honor of Russell P. MacFall who was an American amateur mineralogist and author. Macfallite is a rare mineral that can be found only in the United States at the Manganese mine in Michigan which is its type locality, at the Wasaka mine in Hokkaido, Japan, and at the Cerchiara mine in Liguria, Italy.  It occurs in abundance in Michigan replacing calcite in lenses and fissures in basalt and replacing braunite in low temperature metamorphic conditions in Italy.

Less than 1mm maroon crystals suspended as inclusions in Quartz.