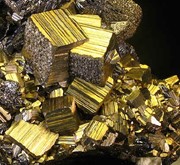 Named for the Greek word for “fire,” pyr, as sparks can be produced from striking it. Pyrite is the most widespread and abundant sulfide in the world and van be found in tens of thousands of localities with large and/or fine crystal being produced from Italy on Elba and at Piedmont, in Spain, Kazakhstan, in the United States from Colorado, Illinois, Arizona, Pennsylvania, Vermont, Montana, Washington, and Missouri, and also in Peru. Pyrite forms in hydrothermal veins, in magmatic segregations, as an accessory mineral, in pegmatites, contact metamorphosed deposits and metamorphic rocks, and in sedimentary rocks as a diagenetic replacement mineral. Pyrite is paramagnetic, magnetic in the presence of applied magnetic fields, and can be used as a semiconductor.

Pyrite with striated cubes to 1.5cm.

Brassy cubic crystals in aggregates resembling balls to 5mm in a large pocket on white Dolomite.


Superb specimen with brassy golden Pyritohedrons to 5mm laced nicely with stacks of thin platy, pseudo-hexagonal, twinned crystals of Chalcocite crystals to 2mm across. There are also some creamy colored unknown crystals in thin platy rosettes. The last photo shows the Dickite.

A locality specimen with tiny Pyrite crystal, one in particular showing elongated cubic development into a rod. Other minerals in the matrix include purple and blue Fluorite and Galena.

Botryoidal Pyrite with balls to 5mm.

This is what has always been called a Pyrite "sun", which is formed in black shales between and parallel to the thin layers resulting in these pancake like aggregates of Pyrite. Those cracks you see are perfectly stable and are rehealed.

A fine cluster of nicely striated, modified cubic, Pyrite crystals from 4 to 10mm. Each crystal is so well-defined you will have fun turning this specimen in your hand while marveling at each crystal.