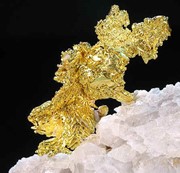 Named from antiquity as the Old English word for the metal, and possibly related to the Sanskrit wok jval. The chemical symbol, Au, comes from the Latin word for gold, aurum. Gold is a common and widespread mineral in small amounts in rocks of many kinds as well as in sea water. It is found in epithermal veins, pegmatites, contact metamorphosed deposits, and in placers. Localities for fine specimens include in Russia, Romania, Australia, New Guinea, South Africa, Canada, the United States including famously here in the Black Hills of South Dakota at the Homestake mine, Venezuela, and Brazil. Hundreds of other minor localities.

Large leaf Gold to over 3.5cm.

A good example of how much of the ore was like at the Homestake mine. That is to say, tiny 1mm grains in Cummingtonite schist with Quartz.

Gold in serpentine. The gold does not actually surface, rather it seems to be in the foliations.

Wire gold throughout matrix. There does not appear to be any tellurides. The gold appears as 7 or more wires less than 1mm in length.

Quartz with a ring of leaf Gold 5mm across.

Leaf gold in several areas up to 4mm across in milky Quartz.

Spongy looking light Gold with a matrix of Arsenopyrite on the backside.

Seldom seen Gold from this major deposit in Ontario. The Musselwhite is an underground mine with reserves of about 2 million ounces of Gold. Production in 2016 was about 260,000 ounces. It is one of the largest Gold mines in Canada. This specimen is very rich with leaf and strigers throughout the Quartz mass with a little Pyrrhotite.

Accounts place Bendigo as the largest producer of Gold from 1850 to 1900. Alluvial gold depostits were some of the richest in the world. This specimen is obviously from the veins and lode deposits and shows spotty Gold along 7mm stringers and grains to 2-3mm. It is intimately associated with several sulfides: Pyrite, Arsenopyrite and Sphalerite.

Wire gold with some forms and branching to 5mm and Gold to about 1-2mm dispersed throughout Quartz matrix with black Ferberite.

Leaf Gold in a 7x4mm area on Quartz in lateritic conglomerate.

Nice little specimen with leaf Gold to 1cm and small areas to 2mm of Sylvanite.

Good coverage - albeit a small specimen - loaded with leaf Gold contrasting nicely in a matrix of white, sugary Quartz.

A small Quartz piece with leaf Gold to 1mm associated with shiny black, foliated and iridescent Tetradymite. Tetradymite is an uncommon bismuth-tellurium sulfide. Seems like not much is known of this mine. The USGS has a little information (click it). Mindat list it here (click it). Tetradymite is indeed found at the Golden Crest with Gold but interestingly so is Beryl, a typical pegmatite mineral.