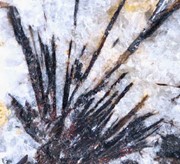 A cut specimen which shows rich mineralization od red blades of Hubnerite, an ore of tungsten. Crystals are embedded and reach 5cm. A sticker shows the origin and date of 1951.

This specimen was collected personally by Arnold Hampson in 1962. Manganiferous Wolframite has been known to occur in the Ophir district since the 1940's. Eckel (1961) states that the San Juan Mountains contain the most significant and richest occurence in the State. The Wolframite is at or near the Mn end of the Hubnerite-Ferberite series and thus is probably Hubnerite. It is widely distributed in Quartz veins in the Silverton district and elsewhere in the San Juans.

Deep reddish brown thin, tabular crystals of Hubnerite to 6mm. Several of the crystals are outstanding and show good terminations and striations. Rich specimen. A favorable locality for this tungstate from Colorado which boast probably more tungsten localities than any other state.

The Uncompahgre mining district is part of the larger Ouray mining district and located south of Ouray in the San Juan Mountains. Over $14 million of gold, silver, copper, lead and zinc has been mined from the district, an area of about 15 square miles. Burbank & Luedke (2008) USGS PP 1753 does not mention any production of tungsten from the district. However it should be noted, according to Eckel (1961), this district was the first reported occurence of Hubnerite in the United States in 1875.

This specimen is specifically from the Zannet Tunnel, which was driven in 1981. The mine itself started in 1875. Though this is not a historic specimen, any serious Colorado collector should have a specimen of Hubnerite from this district.

Fine deep red bladed crystals to 4mm on TN size matrix. Excellent specimen for this mine.