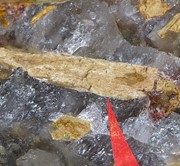 Named in honor of the very first Russian cosmonaut, Yuri Alekseevick Gagarin. Gagarinite is a rare mineral that occurs “as disseminations, segregations, and in veins and miarolitic cavities within Na-metasomatized alkalic granites and quartz-syenites.” Localities for this rare mineral include in kazakhstan, Russia, Norway, the United States, and a few others. It decomposes in water with most of the sodium going into solution. It is also weakly magnetic.

A tiny lustrous pink prismatic hexagonal crystal to about 1mm. Like Gjerdingen, it is found in the Golden Horn Batholith, near Washington Pass, another massive igneous body. The crystals are remarkably similiar. It is named after the Russian cosmonaut, Yuri Alekseyevich Gagarin, the first man in space.